According to the writer Liberac, “Manoel Henrique Pereira, commonly referred to as “Besouro de Maganga” was born in the city of Santo Amaro da Purificaçao in 1885; he is the most famous Capoeirista of all time. His name has been engraved in history and in the memory of Capoeiristas from Bahia and of people who train Capoeira in Brazil and across the world “. He adds that “Besouro de Maganga trained Capoeira before the era of Mestre Pastinha and Mestre Bimba“.

The folklorist Edison Carneiro says that:
“The most famous national Capoeirista originated from Santo Amaro, the sugar cane zone of Bahia, and his nickname was Besouro de Mangangá, i.e. a venomous species of a beetle. He was invincible and unequal. Up to today, Capoeira songs depict his legendary prowess: he was the Mestre of Mestres “.

Cobrinha Verde who was his only student adds that his name: “was given to him in his youth, because many people said that when he got himself in a “scramble” and was faced with a large number of enemies, so much so that it became impossible to beat them, he would then transform himself into a beetle and fly away ” .

Mestre Joao Pequeno, a student of Mestre Pastinha also stated the following: “… Besouro Preto, de Santo Amaro was my father’s (Maximiano Pereira dos Santos) cousin; I had heard about Besouro Preto, and I wanted to become a valentão too, but I wanted to be a valentão that fought against everyone and won (…) In the fazenda de São Pedro, I met Mestre Juvenço, who worked as a blacksmith (ferreiro); he was a friend of Besouro, he told me a lot of stories about Besouro, and told me about how he died too …”.

Besouro remains famous for his clashes with the police against whom he never lost a fight, he remains famous for the way he fought, using Capoeira kicks and knives that knocked down his adversaries who were faced with his Capoeira powers, “Valentao”, “Capadocio” and “Bamba”.

To tell the story of Besouro de Maganga, it also means recounting the cultural aspect of this interesting place. At the beginning of the 20th century, Santo Amaro was an important place because of its sugar and manufacturing industries. Boats transited across the river canals to carry small quantities of goods. Most boats went to Cachoeira and Maragogipe, from where the “saveiros” originated, in order to cross the All Saints’ Bay. Santo Amaro had an upper and lower town.

In the journal of Atarde Joao Muniz (Fred Abreu’s archive), it is written that in 1944: “Besouro was the biggest attraction of my childhood. His simulated fights with Doze Homens, Ioiô, Nicori and other Capoeirista friends, the sound of the berimbau and of the pandeiro, comprised of amazing shows that depicted strength, flexibility and finesse.”

“I was a student of the most legendary of Capoeiristas from Bahia, i.e. Besouro; when he died in the almost equally mythical place of Maracangalha, he was said to be 101 years old, Mr. José Martins dos Santos”. Besourinho de Ouro liked chaos, he fought against 5-6 men, he loved to fight, but only against the police. Once, we were in the Market, in Maracangalha, when he said: “A policeman is coming towards us, leave now because you haven’t learnt the “jump” yet, he said. This was reported in the Correio da Bahia in 2001”

José Brigido Dorneles Antunes, a contemporary of Besouro reported to the writer Antonio Liberac that he: “was also called Besouro Cordao de Ouro by his companions. His companions were: Paulo Barroquinha, Boca de siri, Doze homens, Noca de Jaco and Canario Pardo. They all lived in the area of Trapiche de Baixo.

During the period in which Antunes knew him, Besouro worked as a docker for the saveiros who transited between Salvador, Cachoeira and Maragogipe”. Liberac learnt from Noca de Jaco that “Besouro was born and grew up in the city, after having left the military service; he worked on a boat christened as “Deus me guie”

In a recent article of the Correio da Bahia, a small reproduction of the Certificate of Santa Casa de Misericórdia was printed confirming the entry and death of Manoel Henrique, on 8 July 1924. 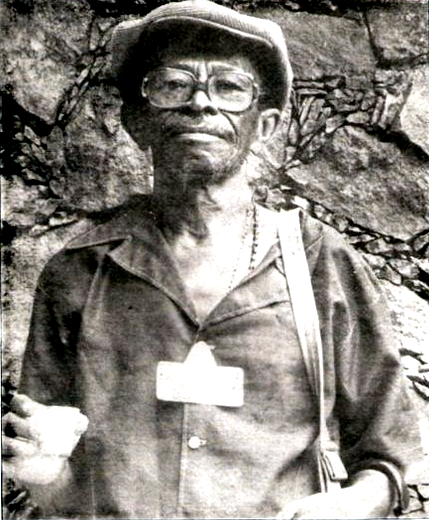